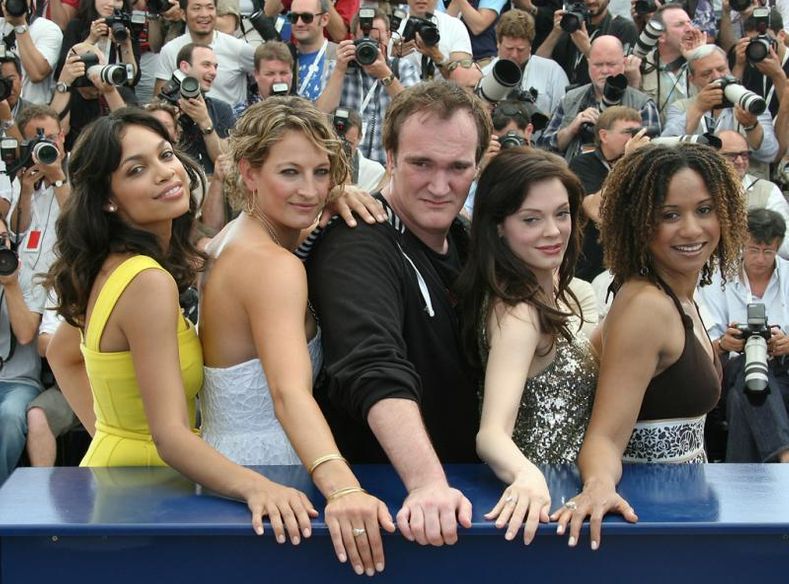 Past Palme d’Or winner Quentin Tarantino is back in the Cannes Competition limelight with his latest, Death Proof. At the press conference today he was flanked by actor Kurt Russell, and actresses Rosario Dawson, Rose McGowan, Tracie Thoms and Zoe Bell. And Harvey Weinstein standing off in the sidelines. Excertps follow.

Quentin Tarantino on the added lap dance scene: “I put that scene back in and I knew I always would. The majority of the stuff that I put back in was stuff that I took out of Grindhouse. Me and Robert made three movies. We made Death Proof, Planet Terror and then we made Grindhouse. Death Proof and Planet Terror were always meant to stand alone. But when we put them together as Grindhouse, it had to work as one evening. So we didn’t cut our movies to the bone, we cut them past the bone.”

Kurt Russell on the Grindhouse experience: “There will be no movies made in the next 5 years like Planet Terror and Death Proof. These two movies are going to go off with a life of their own, but my prediction is that 20 years from now, you’ll want the Grindhouse experience. You won’t want them separately. For the full effect, the other experience is something bizarre that I’ve never experienced before and I like the short version.”

Harvey Weinstein on splitting up the two films: “What you see when you see the new Planet Terror and what you see in Death Proof is that you see Robert Rodriquez making a Robert Rodriquez movie and Tarantino doing pure essence Tarantino. In order to save time and crunch these films together very often removed some of the essence of the film.”

Quentin Tarantino on drive-in movies: “If you have to be a diehard Grindhouse fan to enjoy it, then the movie is actually pretty limited… If you don’t know about those kinds of movies – I’m not saying my movie is better than those movies – but I am trying to transcend it. I do have a different agenda. So if you didn’t grow up with those films, then hopefully everything is brand new for you.”

Quentin Tarantino on his inspiration: “My starting off point was that I wanted to do a slasher film. But the one thing I don’t like about slasher films is that the genre is so rigid and they’re all the same. So I tried to do a completely different thing, but use the structure of a slasher film… That is the third act of every slasher film is the final girl who rises up and has the moral fortitude to beat the boogeyman.”

Quentin Tarantino on the characters: “It always starts with me, with the characters first. It’s all about the characters and then I have to find the right actor for the character. Whenever I cast an actor and try to make them fit into the character, I’ve always regretted it…Whenever I’ve written a character like in the case of Zoe, I didn’t write it for them, I wrote it about them. Zoe is Zoe. Same thing with Uma.”

Rosario Dawson on Tarantino’s influence on her: “At 15, I didn’t watch movies much and the first movie my dad gave me was Reservoir Dogs. I watched it 7 times that week. I was so transfixed with it…He’s making you compelled and feel something about these characters and telling a beautiful story and sucking you into the magic of movie making... And yes you did achieve that. I did have to watch your movie again, and again, and again.” 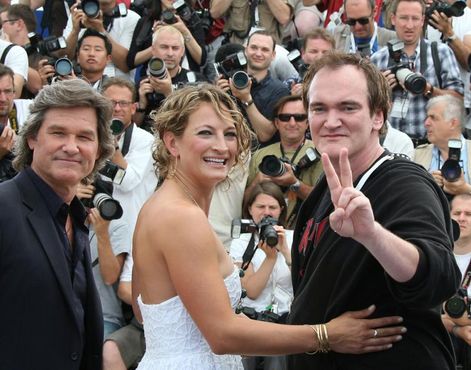