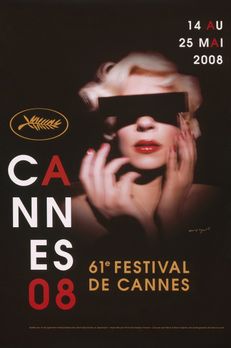 The author of the poster of the Festival de Cannes 2008 is Pierre Collier, a cinema poster artist , who worked from a photograph by David Lynch who represents the model of the Crazy Horse Anouk Marguerite. "A few months ago, reading Eric Reinhart's latest novel, "Cinderella", rekindled in me a taste for the Palais Royal quarter. Often too hastily traversed, as it adjoins the most excellent "Chez Georges" restaurant, rue du Mail... One afternoon that I granted myself entirely devoted to strolling, I crossed the threshold of the covered passageway Vero Dodat with all its subtle melancholy. There one comes across a gallery, simply named "Galerie du Passage", which had on display a troubling exhibit of fantastical shoes in situ, laid out at the feet of extravagant, bared creatures. This was David Lynch's photograph exhibit, "FETISH", sponsored by the brilliant creator of shoes, Christian Louboutin. I myself was confronted by an order as flattering as it was perilous: the Festival de Cannes had asked me to design the poster for the 2008 edition. Once one has reasonably refrained from employing the usual cast of the Red Steps, film strips, cameras, clapboards and palm trees, the temptation of a homage in the blink of an eye becomes a must. But the Festival wished to look forward. I quickly proposed a typographical principle from the undying font "Avant Garde Demi, Capitals in 100 spacing", then that of "fade-in", such as ritually employed by Jean-Luc Godard in his "Hi(stories) of Cinema". But what should appear in it? What would be the nature of the revelation? My mind was a total blank. It is then that I remembered the photograph by David Lynch, that face of a woman revealed to concealed eyes... Reception / Screening... a moment in suspense... in the grip of sensuality. Platinum blond like a reminiscence of Norma Jean. A sanguine mouth offered like an echo attentive to this anthracite maskscreen... in the expectation of a revelation, magic? The cinema."