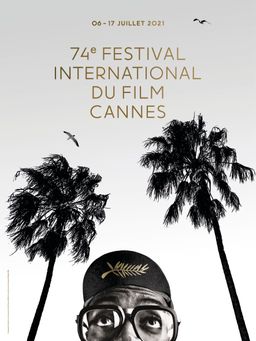 For the immense impatience to finally find ourselves again in the Cannes setting: the seaside, the palm trees and the silver screen, just like a blank page, that will welcome the films of the Official Selection… For that curious look he is going to put on the work of his fellow filmmakers who bring us news of the World – of theirs and surely a little bit of ours too… For this personal view that he has shared with us since his very first feature: shot in black and white in the heat of summer 1985, he was already shaking up cinema by imposing, even back then, his ground-breaking style, imbedded in urban and pop culture… For this tender take he embodies as Mars Blackmon, the B-Boy in She’s Gotta Have It – a stereotypical representation of the Afro-American community that the film blows apart… For his mischievous eye which, despite constantly questioning and incessantly rebelling for nearly four decades, never neglects entertainment… ... Spike Lee, citizen of the "People's Republic of Brooklyn, New York", is on the poster of this collector's edition. Of course! From the "People's Republic of the World of Cinema, Cannes", The Festival de Cannes team