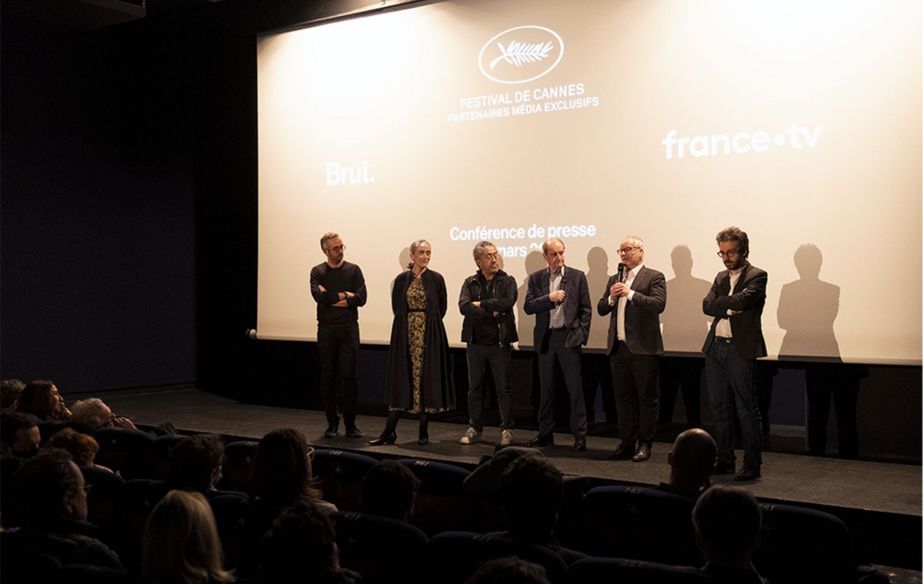 The Festival de Cannes is delighted to be embarking on a new partnership with France Télévisions and Brut., marking a fresh chapter in its history. The public broadcasting service's return to the Croisette with France Télévisions' full range of services and channels combined with Brut.'s international presence is set to ensure unprecedented, ground-breaking new coverage of the event, reaching a wider and more diverse audience than ever before. After two years of pandemic that dealt a blow to the film industry, the Festival's new partnerships are a powerful reassertion of the key role that culture and film play in our lives.

From 17 to 28 May 2022, France Télévisions and Brut. will be immersing themselves in the magic of the Festival de Cannes and its 75th anniversary.

France's leading media group will be pulling out all the stops to cover the Festival in full across its linear and digital channels, including the france.tv platform. In addition to the Opening and Closing Ceremonies with live broadcasting of the Awards Ceremony, a number of highlights will be screened daily in the France 2 and France 3 news segments, on Culturebox with special evening slots dedicated to the Festival, and a line-up of exclusive programmes, notably on France 5, based straight out of the Croisette for the duration of the event.

The Festival will enjoy unprecedented coverage on a global scale thanks to Brut.'s social media reach and 500 million viewers in over 100 countries, most of whom are in the 18-to-34 age bracket. Its unique multilingual format will ensure that Brut. boosts the Festival's visibility across four continents: Europe, America, Asia, and Africa.

The Opening and Awards (Closing) Ceremonies live on France 2

- 9:00pm to 10:30pm: Screening of a film from one of the Cannes Selections (including two free-play exclusives)

- From 10:30pm (until 5:00am): the Festival TV (news from the Festival, photocalls, film press conferences, masterclass)

A line-up of Cannes films to be screened from Friday 13 May on the group's channels (France 2, France 3, France 5, Okoo) and from Tuesday 17 May on Culturebox, as well as themed documentaries (Les Effrontées in the second half of the evening on France 5 on Sunday 15 and Sunday 22 May).

More films available on catch-up on france.tv, plus four collections dedicated to Cannes:

- A collection devoted to female filmmakers featuring films selected for the Directors' Fortnight;

- A Cinéma de Minuit special collection of book-to-screen adaptations during the La Grande Librairie programme live from Cannes on 25 May.

Iconic programmes that delve into the heart of the Festival:

- La Grande Librairie (special edition filmed live from Cannes, screened in the first half of the evening of Wednesday 25 May);

- C Ce Soir (live from Cannes on Friday 20 May and Friday 27 May in the second half of the evening);

Lots of live link-ups throughout the day, giving viewers the chance to follow along with all the Festival's breaking news from a range of different perspectives:

- Plus wide-reaching coverage on regional channels across France throughout the Festival, notably on France 3 Provence Alpes Côte d'Azur, which will offer particularly broad coverage.

The 75th edition of the Festival: to celebrate our anniversary, a documentary will be screened for the opening of the Festival (second half of the evening on France 2) as well as a concert gala.

Brut. is proud to be partnering up with France Télévisions to raise the profile and deepen the impact of the world's greatest film festival. Brut. is a 100% digital media channel distributed across international platforms with 450 million viewers in 100 countries around the world, notably among 18- to 34-year-olds looking to stay abreast of the latest news and enjoy down-time differently.

The idea is to increase the event's visibility among the younger generations throughout the world, raising its profile across a community with an eclectic range of interests but a shared appreciation for openness and values such as diversity, power balances, gender identity, love, social responsibility, and more: values that the films at Cannes all share too, irrespective of their country of origin.

To do so, Brut. offers a fresh editorial line embodied by its in-house journalists and a stable of content creators who play an active role in enacting change.

Brut. will cover the Opening and Closing Ceremonies, the red carpet, the photocalls and the press conferences with content adapted to social media platforms such as Tik Tok, Snapchat, Instagram, Facebook, and Twitter. Augustin Trapenard will serve up a long-form interview every day based on the latest film news. The Brut. reporters will create exclusive content focused on the event and the talent that goes into bringing the Festival to life both on and off the stage.

Brut. will also be launching its Creator programme, a brand-new editorial scheme designed to connect the younger generations with the Festival de Cannes' challenging and thought-provoking films in a unique opportunity that cuts straight to the heart of the Cannes experience: content creators from around the world invited by Brut. and given carte blanche to cover the Festival as they see fit.