The magic of a projection in the movie theatres of Cannes is not a new experience for Valeria Golino. The Italian director knows her way around the Festival, having presented six of her movies here as an actress, most recently, Actrices, by Valeria Bruni-Tedeschi. For Miele, her first full-length movie, the film-maker was inspired by Vi Perdono, the novel by Italian writer Mauro Covacich that deals with the thorny subject of euthanasia.

Tell us how your film came about...
Three years ago, while I was doing my first short movie as a director, I came across a book which impressed me... I asked my two producing partners to read it as well and after that we bought the rights. Then, I asked the two screenwriters Francesca Marciano and Valia Santella to write the treatment of the script with me.

Any especial memory or anecdote from the shooting ?
While I was doing locations for the Movie and specifically looking on a beach town for the house of my protagonist, I was drawn to a little house on the beach which to me was the perfect home for her. It wasn't particularly beautiful. It was actually quite ugly, but for some reason I insisted with the location manager. Later on, I found out that the writer of the book, Mauro Covacich, was living in that house when he wrote this story !

What type of cinema has influenced you ?
The directors from the past who influence me are Friedrich W. Murnau, Federico Fellini, PierPaolo Pasolini and Francois Truffaut. I also love contemporary directors such as Martin Scorsese, David Lynch, Roman Polanski, Gus Van Sant, Paul Thomas Anderson, and Jane Campion.

Can you tell us about your next project ?
Yet, I don't have any project as a director... but I have two movies as an actress coming out at the end of summer and this autumn. Come Il Vento, by Marco Puccioni and Paolo Virzi's Il Capitale Umamo. 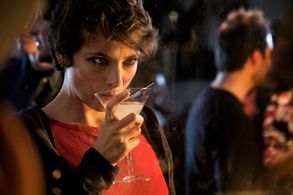