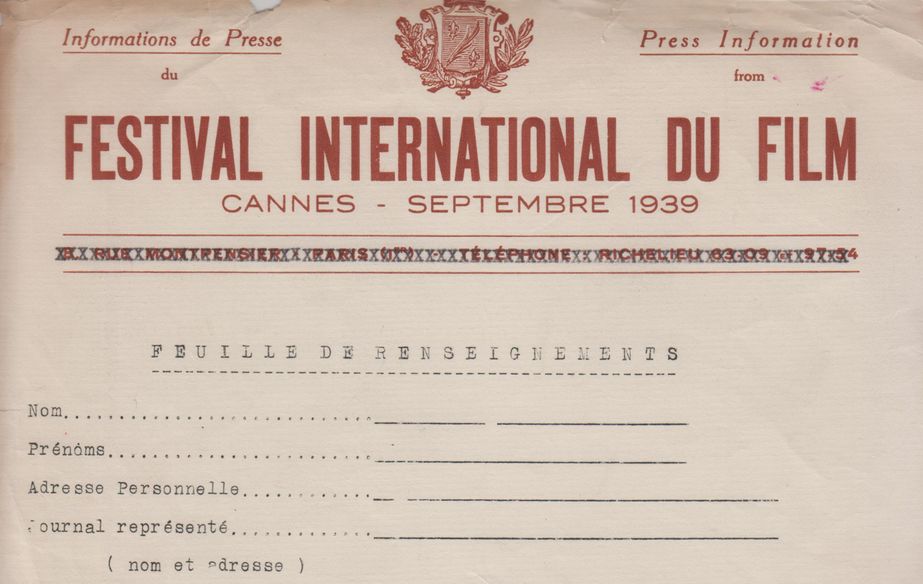 In September 1939, after several months of diplomatic discussions and economic negotiations, the town of Cannes was ready to host its first International Film Festival. But what should have been a cinematic gathering of the 'free world' to counter the totalitarian atmosphere of the 1938 Venice Mostra was overtaken by historical events…

It had all begun so well...

One month before the event was to begin, the stars and tourists began to flock to the Croisette. MGM chartered a transatlantic liner with some of the greatest American stars on board: Tyrone Power, Gary Cooper, Douglas Fairbanks and Norma Shearer. Louis Lumière, Fernandel and the Duchess of Windsor were also in attendance.
In this audio archive, Jean Zay explains the missions of the new Festival and explains the sequence of events, with a programme including the inaugural dinner, Cinema Night, the Grand Dinner and other highlights.

The first International Cannes Film Festival was about to begin. The parties were in full swing and the guests clearly enjoying their experience of Mediterranean Dolce Vita. The Palm Beach and the villas were full of aristocratic tourists and the local gentry. Count d’Herbemont, in charge of the festivities, had organised a cosmopolitan series of events throughout the Festival, including a fabulous evening event at the Eden Roc hotel before the event got underway. High society also flocked to the Bal des Petits Lits Blancs, a charity ball in aid of children with TB. That evening, while Fernandel was getting ready in the wings, a violent storm broke out over the Croisette, as if to presage the events about to change this history of France. 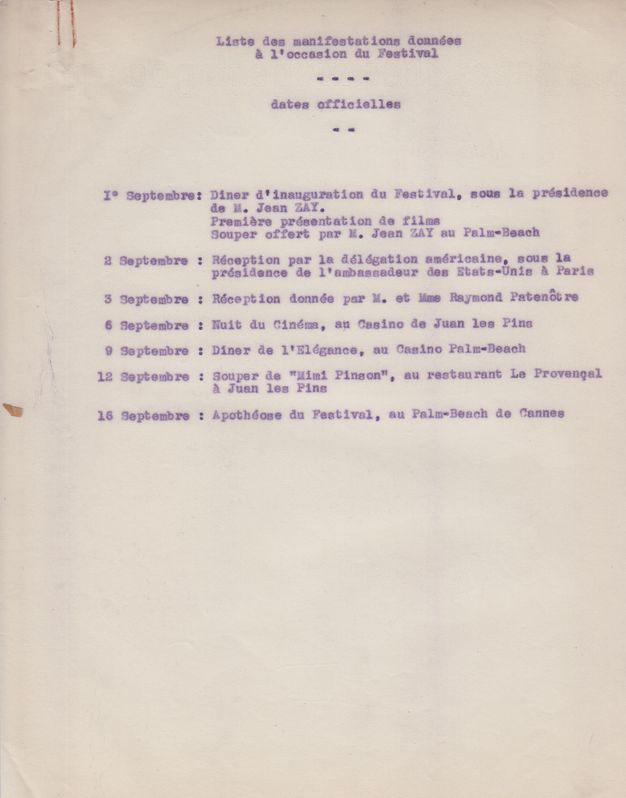 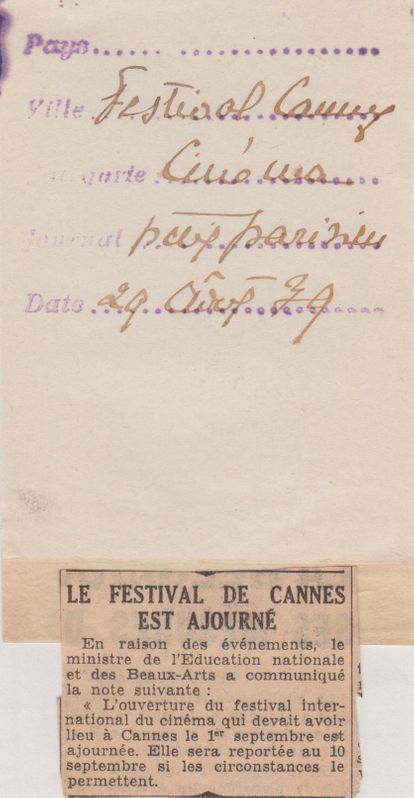 List of events scheduled for the 1939 Festival de Cannes © FDC

1st September: Poland invaded on the day the Festival was to be inaugurated

Initially postponed in view of the international circumstances, the Festival was officially cancelled on 27 August 1939. In fact, the signing of the German-Soviet pact on 23 August had sounded the death knell for the festivities and the town began to empty as quickly as it had filled up. On 1st September, the day the Festival was to be inaugurated, the German troops invaded Poland. War was declared on 3 September. The 26 films which made up the 1939 Selection were never shown to the public in Cannes. The only screening to take place despite the circumstances was The Hunchback of Notre-Dame by William Dieterle, for whom the Americans had built a cardboard reproduction of Notre Dame on the beach.
In 1958, Philippe Erlanger, the brains behind of the Festival de Cannes, looked back at the genesis of the event and the ghost of the 1939 Festival with François Chalais, the  journalist inextricably bound up with the Cannes legend, whose "Reflets de Cannes" programmes had done so much to create the myth.

In 2002, the Festival decided to retrieve this event from the shadows of its history with a tribute. Seven films from the time were screened, including Victor Fleming's The Wizard of Oz. A jury apppointed for the occasion under the presidency of writer Jean D'Ormesson and made up of Dieter Kosslick, Director of the Berlin Festival, Alberto Barbera, Director of Festivals in Italy (artistic director of the Venice Monstra since 2012, thus bringing events full circle!)  Lia Van Leer, Director of the Festival of Jerusalem, Ferid Boughedir, the Tunisian director and Raymond Chirat, film historian, was tasked with awarding prizes for the 1939 festival. 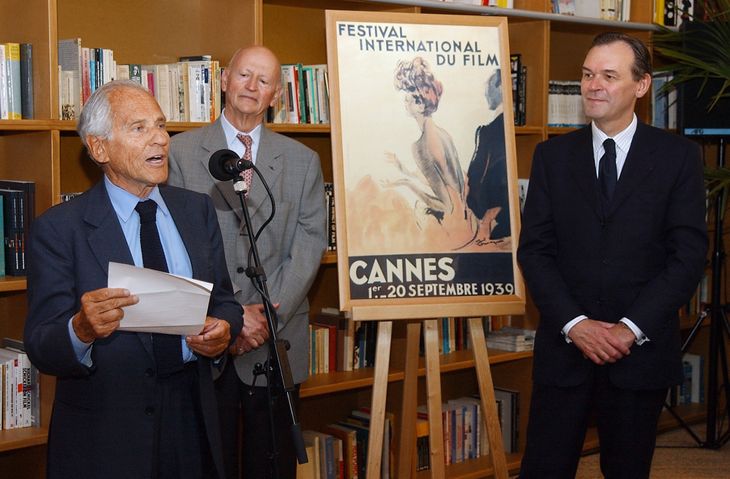 Jean D'Ormesson, President of the Jury in 1939, awarded that year's prizes no fewer than 63 years later. © FDC

A mere 63 years late, the Palme d'or was unanimously awarded to Cecil B. DeMille's Union Pacific, whose title echoed the Festival's original vision: 'to create a spirit of collaboration between all film producing countries.' With a dash of humour, the jury also paid tribute to 'two female hopefuls to whom it presents its warmest wishes, and for whom it dares to promise a great career, Judy Garland in The Wizard of Oz by Victor Fleming and Michèle Morgan in La Loi du nord by Jacques Feyder …' 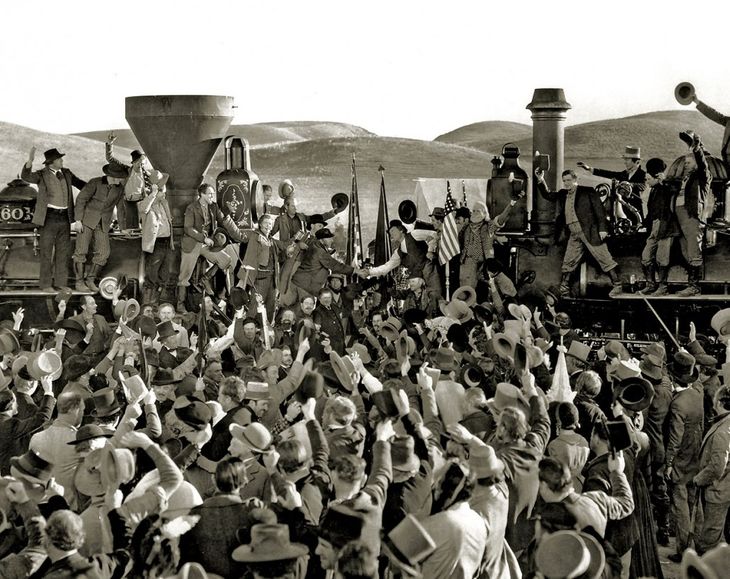 Illustrations:
Press factsheet: Festival administrative archives. Can be consulted at the Cinémathèque Française FIFA 924 B148
List of events: FIFA 909 B147
Press clipping : FIFA 939 B 150 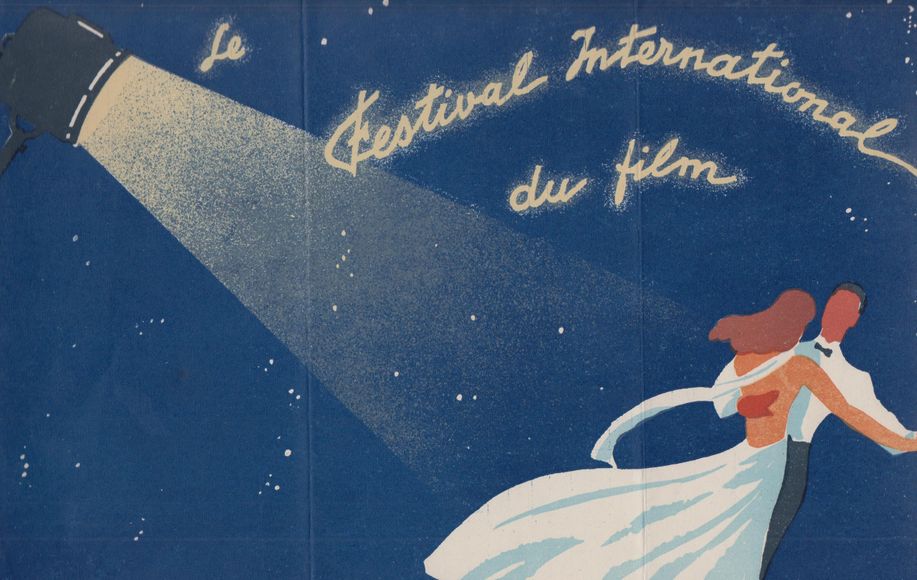 Birth of a Festival