In the 1980s, the Official Selection took a stand against censorship and various international pressures. With freedom of expression at the heart of its vision, it introduced new young directors from all over the world such as Stephen Frears, Leos Carax, Lars Von Trier, Spike Lee, Jim Jarmusch, André Téchiné or Emir Kusturica. And some of them went on to garner awards on stage, alongside well established directors such as Akira Kurosawa, Maurice Pialat or Wim Wenders.

A look back at a decade of Palmes d'or that you can watch – and watch again – at home.

Extract: All That Jazz by Bob Fosse

With Hollywood gradually losing interest in musicals, Bob Fosse, director of "Chicago" in 1975, revived the genre by drawing inspiration from his own life. In All That Jazz, Roy Scheider plays Joe, a Broadway choreographer in the midst of preparing for a show. At the height of his fame, he suffers a heart attack. On his deathbed, he fantasises about saying goodbye to the stage.

The film became sadly premonitory when, in 1987, Bob Fosse died of exhaustion in the line of duty.

Kagemusha, (Shadow Warrior), the tied Palme d'or at the 1980 Festival, marked the consecration of Akira Kurosawa. Although the Japanese director already had an important filmography behind him, Georges Lucas and Francis Ford Coppola stepped up to finance the Shakespearean tragedy he had wanted to direct for years.

The story takes place in feudal Japan. Shingen, the leader of the powerful Takeda clan is seriously wounded in battle. Before he dies, he asks that his disappearance be kept secret for three years. The prisoner Kagemusha, spared for his resemblance to Shingen, is ordered to become his understudy. Actor Tatsuya Nakadai brilliantly plays the two leading roles. 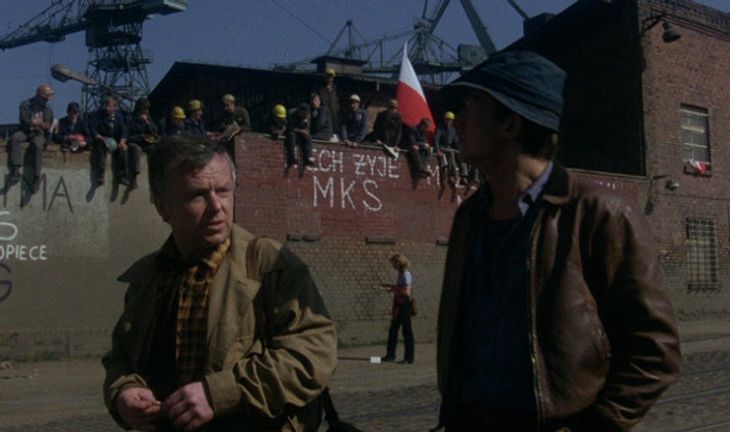 Poland, 1980. During the strike at the Gdansk shipyards, Winkel is a journalist working for state television, charged by a politician with investigating trade unions and tarnishing their image. When Winkel realises that he had been manipulated, he decides to join the strikers.

With Man of Iron, Polish director Andrzej Wajda continues the story of Man of Marble (1977). The political significance of his work reached its climax in December 1981, when a state of emergency was proclaimed throughout the country.

Adapted from the novel by Thomas Hauser, Missing echoes Costa-Gavras' previous political fictions such as Z (1969) and The Confession (1970). It was inspired by the story of the American journalist Charles Horman, imprisoned in Chile after Pinochet's coup d'état in 1973. With this scathing political attack in which a father (Jack Lemmon) and his daughter-in-law (Sissy Spacek) go in search of the disappeared man (John Shea), the director also pays homage to President Salvador Allende.

Tied for the Palme d'Or at the Cannes Film Festival in 1982, Yol also was a denunciation of a dictatorial regime. The film narrates the fate of five Turkish prisoners who are granted a week-long release.

Yılmaz Güney wrote the screenplay in Turkish and Kurdish while he was wrongly imprisoned for murder. He took advantage of a release permit to flee the country and was on the Interpol wanted list at the very moment his film was being screened in Cannes.

楢山節考, Narayama bushiko (The Ballad of Narayama) by Shōhei Imamura (1983)

Trailer: The Ballad of Narayama by Shōhei Imamura

The Ballad of Narayama marked the first Palme d'Or for Japanese director Shōhei Imamura. The film plunges us into the middle of the 19th century, into the daily life of a village in Northern Japan. According to tradition, Orin (Sumiko Sakamoto) – now aged 70 – reaches the age of retiring to Mount Narayama to die. Her son Tatsuhei (Ken Ogata) faces the onerous task of carrying her on his shoulders and abandoning her to the vultures at the top of the mountain.

With this film, the heir of the Japanese New Wave delivers a critique of modern society: "For me, the Japan of today is nothing but a fiction," said Imamura.

A man in a suit is wandering in the desert. It's been four years since he disappeared. His brother Walt picks him up at the Mexican border and drives him back to Los Angeles. But the man, named Dean, seems to have lost his memory and the use of speech. After locating his son, he decides to go with him to meet the woman he loved. 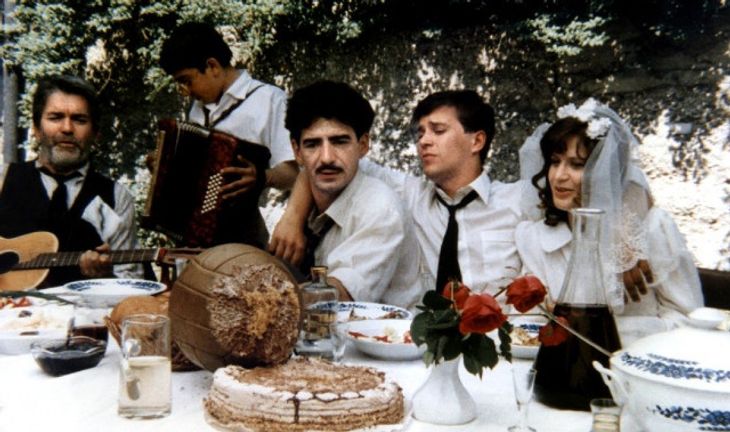 When Father Was Away on Business by Emir Kusturica © Centar Films

In Yugoslavia, at the beginning of the 1950s, when the split between Tito and Stalin brings the country's relationship to communism into question, young Malik looks out at the adult world. One day, his father disappears and his mother explains to him that he has gone on a business trip. In reality, he has been sent to a labour camp after being denounced by his mistress. In light of the crises his family and country are going through, Malik takes refuge in sleepwalking.

For his second feature film, Emir Kusturica directs those who will become his favourite actors: Miki Manojlovic, Davor Dujmovic and Mirjana Karanovic. 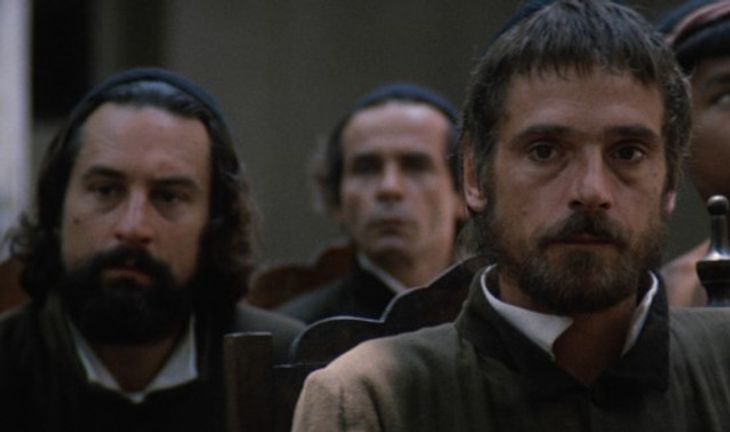 In the 18th century, in an unexplored region of South America, there was a Jesuit community led by Father Raphael (Jeremy Irons). The purpose of the congregation was to convert the Guarani people to religion. They are joined by Rodrigo Mendoza (Robert De Niro), a mercenary who grew rich thanks to the slave trade and who is seeking redemption. The two men join forces to fight against Spanish and Portuguese domination.

A humanistic historical drama, The Mission is further enhanced by the music of Ennio Morricone.

"Seeing as you don't love me, let me tell you that I don't love you either," said Maurice Pialat as he accepted the Palme d'or to the sound of boos. Under the Sun of Satan certainly unleashed passions. The film was an adaptation of the novel by George Bernanos, an author already brought to the screen by Robert Bresson with Diary of a Country Priest (1951) and Mouchette (1967). Gérard Depardieu plays Father Donissan, officiating in a gloomy village under the tutelage of Father Menou-Segrais (Maurice Pialat). A teenage girl named Mouchette (Sandrine Bonnaire) confesses to him the crime she has just committed. The tortured mystical young clergyman wages his battle with Evil.

Billie August adapts a famous romantic saga from Danish literature, written between 1906 and 1910 by Martin Andersen Nexø. In the 19th century, Lasse (Max von Sydow) and his young son Pelle (Pelle Hvenegaard) leave Sweden to emigrate to Denmark by sea in search of a better life. When they reach their destination, they are exploited by a farmer and have to resign themselves to living in misery.

The film won the Oscar for Best Foreign Film in 1989.

Ann and John Bishop (Andie MacDowell and Peter Gallagher) are the ideal couple, but no longer desire each other. An old friend of John's, Graham (James Spader) appears in their lives and stirs up trouble. He collects video confessions from women who reveal all about their sex life...

After Louis Malle, Steven Soderbergh is the second youngest director to receive the Palme d'Or with his first film Sex, Lies and Videotape.