THE UN CERTAIN REGARD POSTER 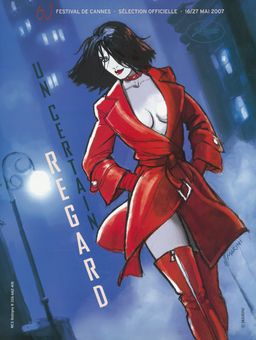 The original artwork for the poster Un Certain Regard 2007 was created by Enrico Marini. Italian drawing artist born in Switzerland in 1969. "Graphic literature and film speak the same language : that of the image. I like film and I especially like telling stories with images - kinetic stories that thread through my head like films." My storyboards transform me by turns into a screenwriter, production or costume designer, actor or director." Enrico Marini 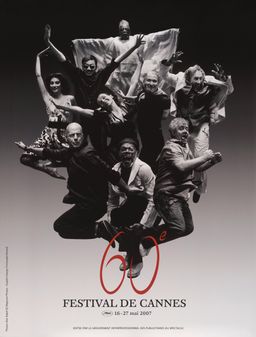 "When you ask a celebrity to "jump", his attention is essentially concentrated on his jump, the mask of posture falls and reveals his true personality." Philippe Halsman. More than a year ago, we wondered how to celebrate our 60th anniversary. Thus, we had the same desire to prefigure the future and place films and artists alike in the limelight to honour the living force of cinema by celebrating 60 years of creation with creation. The poster, that renowned emblem of the Festival, is the first illustration. From a meeting with the Magnum Agency in 2006 arose the idea, in order to celebrate in 2007 our 60th joint anniversary, of reinventing the cult work of American photographer Philippe Halsman, by creating the "new jumpology", namely the greatest choreography of world cinema celebrities ever accomplished. During the previous Festival de Cannes, hundred artists "jumped" in front of the lens of Magnum photographer Alex Majoli. Between their film's photo-call and press conference, they spontaneously lent themselves to the game with both surprise and pleasure. It is from this photographic treasure-trove that graphic designer Christophe Renard composed an original work, composed of artists the world over - Pedro Almodovar, Juliette Binoche, Jane Campion, Souleymane Cissé, Penélope Cruz, Gérard Depardieu, Samuel L. Jackson, Bruce Willis, Wong Kar Wai - who light the heavens like so many fireworks in celebration of this 60th anniversary. The poster, an ecstasy of the pleasure of acting and creation!